A blind elephant named Jokia is still mourning the loss of Mae Perm, her close companion of 17 years who died earlier this month at Thailand's Elephant Nature Park (ENP), a sanctuary and rescue for elephants.

When Mae Perm first passed away, Jokia spent six hours standing over her friend's lifeless body, "touching and nudging and leaning against" her, Lek Chailert, the founder of ENP, wrote at the time.

Weeks later, Jokia still misses her friend, who died of of old age, and even tries to search for her, as a new video shows.

"While Mae Perm was here she was the light behind Jokia's eyes, and the will to live. Since Mae Perm passed away, Jokia spends her time looking for the place, the smells, the memories where they walked together all around where they both used to stay together," an ENP staffer wrote in a recent video showing Jokia searching for Mae Perm. "She sniffs everywhere, and when she finds where Mae Perm has peed, she stops for a long time to observe and then she displays her sorrow and clearly mourns." 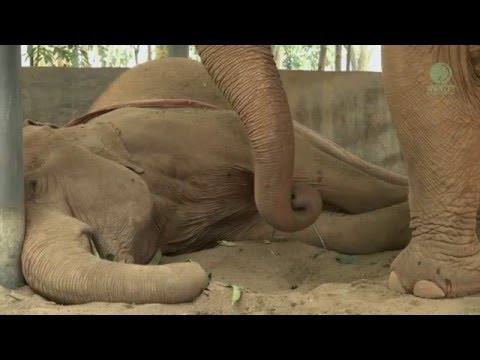 Now when Jokia calls out with a low rumble, she waits for a response from Mae Perm, but hears no reply. Previously, Mae Perm would be there to comfort and play with her.

"I can feel her emptiness," the ENP staffer continued. "I hope time can help to heal her."

Like humans, elephants are extraordinarily social and emotional animals. As this video shows, they can form lasting and meaningful relationships with each other.

But ENP is determined to help Jokia cheer up. On Sunday, Chailert posted a set of photos showing Jokia playing with several other elephants at the sanctuary.

"We are trying to find a friend for Jokia and introduce many elephants to her but she is still not easy to accept anyone yet," Chailert wrote. "For the last couple of days we find out that she is [sic] very fond of Sri Prae, mother of Navann ... We hope that she moves toward a new friend soon. But we cannot rush her. It is her beautiful life and we love her so painfully."

Visit ENP's website to learn more about the work it does. You can also support Jokia and the other elephants ENP rescues by making a donation through the Save Elephant Foundation.