He lived off beer and bread, but now he's finally safe.

Over the last few days, heavy crates have been rumbling into a wildlife sanctuary near Pristina, Kosovo.

And when those crates opened, a couple of bears who had been prisoners all their lives took their first tentative steps on the green grass of their new homes.

For Tomi and Gjina, who were once among "the saddest bears in Europe," every moment is nothing short of an epiphany.

Like Tomi's first experience with a pool of water.

And Gjina's first tentative steps into the great wide open.

There's a third fresh arrival at the Prishtina Bear Sanctuary named Pashuk. But the bear has yet to leave his new kennel. His door, however, will always be open and it's only a matter of time before he joins his new friends.

You can't blame any of them for taking things slowly. Their entire lives were spent in cages, as dubious tourist attractions in Albania. Over the last month or so, Four Paws, with help from the Albanian government, has freed them from a life in chains - a life whose sole purpose was to entertain passersby with sad spectacle.

"Our whole team is overjoyed with the rescue of Tomi, Pashuk and Gijna, knowing they will be given the highest standard of care for the rest of their lives," Claire LaFrance, communications director at Four Paws, told The Dodo. "They will never perform again, nor be forced to eat or drink inappropriate things, but most importantly, they are free from the confines and isolation of inadequate captivity."

Albania is still home to around 50 "display" bears, often living on a diet of beer and bread, never knowing life beyond a heavy chain.

"We hope that, for all of Albania's 'saddest bears' languishing in small cages, we are able to give them this very same, very happy ending," LaFrance said.

For now, Tomi, Gijna and Pashuk represent the first wave of freed Albanian bears, soaking up 40 sprawling acres along with bears rescued from similar straits across the region.

Although their future is bright now, their history of abuse has taken a toll.

Gijna, for instance, weighs just 140 pounds - a ghost of the 450 pounds that a healthy bear should tip the scales at, according to Four Paws.

Fortunately, at the sanctuary, she has all the room in the world to grow, no longer in a cell that measured just 13 by 6.5 feet.

And Tomi, whose former home was a concrete cell, flanked by toilets at the side of a restaurant, is nursing badly damaged teeth and injuries to his upper body.

Then there's the reclusive Pashuk, who was found nearly strangled by the steel collar that he had been growing into since he was a cub.

"I saw many suffering bears, but I have never seen anything like this," Carsten Hertwig, a bear expert at Four Paws, noted earlier this month. "The chain was grown in so deeply that the skin had already grown over it. His owners had put Pashuk on the chain when he was still small, locked him in the shed and never removed the chain ever since."

But when Pashuk chooses to emerge from his enclosure at the bear sanctuary, the chains will be long behind him. And for the first time in his life, he will be among friends.

"From now on, they'll be given the care they need in an appropriate environment, and will want for nothing," Thomas Pietsch, a wild animal expert at Four Paws, said in a press release sent to The Dodo.

While these bears found their way to a happy ending, many more remain scattered throughout Albania, suffering in silence. They need to be here. You can join this fight by signing this petition. You can also support Four Paws by making a donation here.

Watch a video of Tomi's rescue and arrival at the bear sanctuary below: 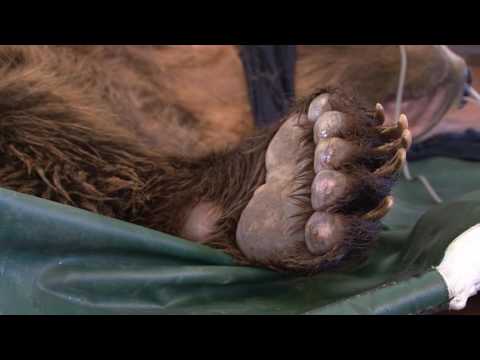