Bear Walks Like A Human ... But The Reason Is Far From Funny

Footage taken at a wildlife sanctuary in Laos has gone viral for its "funny" depiction of a rescued Asiatic black bear walking upright on two legs like a human - but the likely reason for this behavior is nothing short of heartbreaking. 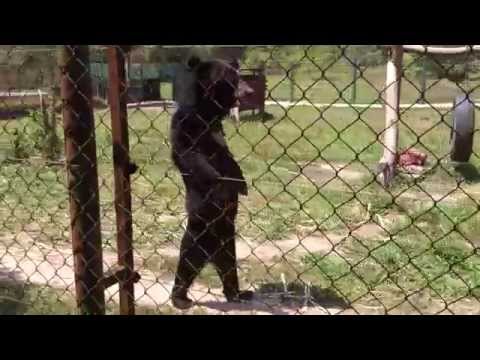 Jinata's "educated guess" is that this detrimental treatment contributed to his propensity to walk around on two feet.

"With this living condition it's not surprising that he's malnourished, which is shown by how short his legs are and the body size is disproportionately small for his head size. He is much smaller than an adult Asiatic black bear of his age should be," Jinata writes on her blog, Holiztic Vet.

"Before his current place was turned into a rescue center, it functioned as a zoo where visitors could feed him and other bears by throwing food from outside the fence. With his smaller and malnourished body, it is easier for him to stand on his hind leg because his spine can support his light body weight. Standing up and waiting for food slowly became a habit which he does on a daily basis now," Jinata continues.

Today, more than 10,000 bears are believed to be subjected to lives of pain and suffering on bile farms throughout Southeast Asia, but help may be on the way as demand for bile has been plummeting. Rescue groups, like Animals Asia, have so far rescued around 400 bears and retired them to sanctuaries.

To learn how you can help, visit Animals Asia's website here.