These dogs are among a group rescued from a research facility in South Korea earlier this year under the direction of the Beagle Freedom Project and local animal charities. After being forced to endure a life of confinement and subjugation, the beagles had been slated to be euthanized before rescuers convinced their handlers to release them into retirement instead.

Despite the many years they'd spent devoid of comfort in the lab, valued only for what could be learned from their suffering, the timid beagles' spirits were not broken. Described as "all incredibly sweet," they slowly began to open up to feelings which up until then had been foreign to them, those of human love and affection.

Freed from their sad existences and introduced to the gentler side of humanity, the rescued beagles still lacked the sense of joy that can come from finding a stable home. Fortunately, half of the group were adopted to families in South Korea, but for the remaining five, hope would lie overseas, thousands of miles away in California.

The journey for those pups was a long one, no doubt ripe with confusion, but what awaited them was a welcoming party and a celebration for the senses. At a ceremony of sorts in a backyard in Los Angeles, the newly-arrived dogs to were introduced to blue sky, a soft lawn - and most importantly of all, freedom.

It was a moving scene for the crowd of well-wishers, but for the dogs themselves it was only a first tentative step on the grassy road to a better life. As the Beagle Freedom Project reports, each of the former lab subjects are currently in foster homes being showered with love as they adjust to their bright future as family pets. 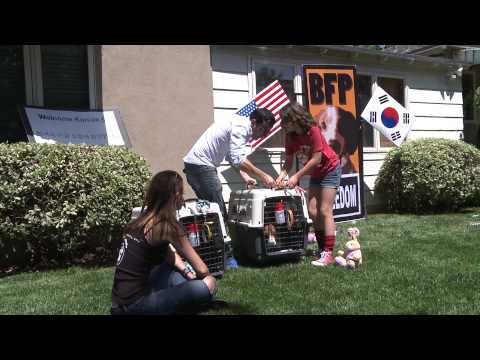 "These sweet dogs are the lucky ones," writes the rescue group. "Korea uses 8,000 dogs a year in research and the vast majority will never get to know love and liberation."

To learn how to adopt a rescued beagle, or find out other ways to help, visit the Beagle Freedom Project's website.