Baby Sharks Rescued From Fish Market Released Into The Wild

Even under ideal circumstances, survival is no guarantee for newly hatched shark pups. But thanks to the helping hand of conservationists, several sharks that otherwise stood no chance at all are now swimming alive and free.

Over the weekend, marine biologists in Malta released three bottom-feeding Nursehound shark pups into the open waters of the Mediterranean -- a journey six months in the making. Last year, the animals, then just embryos, were rescued from pregnant dead sharks being sold at a wholesale fish market. The eggs were then sent to the Malta National Aquarium to be hatched and cared for through the most vulnerable early stages of their lives.

Aquarium curator Mike Hutchison tells Malta Today that the baby sharks, once destined to slowly perish on land, are now healthy and strong enough to fend for themselves at sea.

"Being top predators, the sharks are likely to survive in the wild," he says. 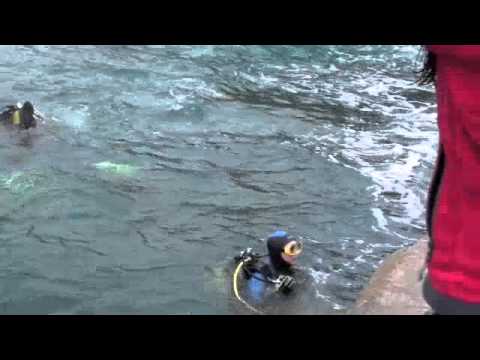 The release is part of a joint project between the aquarium and marine conservation group Sharklab Malta, whose aim it is to help protect and restore the Mediterranean ecosystem which has been depleted of sharks and other species due to overfishing.

"We, as the human species, need to change our perception of these animals. They are not the big-mouthed, slashing toothed man-eaters so often portrayed in the media," writes Sharklab Malta. "They are critical, amazing, diverse, spectacular and misunderstood. They need to be appreciated and understood for the roles they play in our waters, here around Malta and across the globe."