Baby Orangutan Rescued From A Life Of Suffering

After spending the first 10 months of his life as a captive plaything, a young orangutan named Budi is finally getting the help he so desperately needs.

A woman in a remote village handed Budi over to International Animal Rescue (IAR) in Indonesia after she kept him as a pet. While it's unclear how she came to possess him, Budi's suffering was apparent.

"Budi had spent more than 10 months in a chicken cage, drinking only condensed milk," says IAR veterinarian Ayu Handayani in a release. "The owner said that she was afraid to give Budi any fruits and thought that giving condensed milk would be sufficient."

At an age when he should be rapidly gaining strength and agility in the forests with his family, Budi's tiny body was frail from neglect and swollen from malnourishment, so much so that IAR medical staff wasn't sure he would make it.

Now, in the hands of experts, the slightest touch still seems to fill Budi with agony.

"We cannot even imagine how much pain this small baby has suffered," says Karmele L. Sanchez, IAR's Programme Director in Indonesia. "His eyes fill with tears every time he's moved by the doctors and he screams in pain. It's really amazing that Budi has been able to survive this long."

IAR reports that Budi is making a slow, steady recovery, thanks both to the care he's receiving and his own will to persevere.

"Budi is a very strong little baby and he is fighting very hard to survive," Sanchez says.

Budi is hardly alone in the sad life he's led. As the World Wildlife Fund reports, female orangutans are often hunted and killed so that their young offspring can be sold into the exotic pet trade. Without the nourishment of their mothers, an estimated four to five baby orangutans die for every one that survives long enough to make it to market.

But the threat to Budi's species doesn't end there. Orangutans have lost more than 80 percent of their forest habitat in the past two decades, largely to make room for massive palm oil plantations.

The Orangutan Conservancy says threats facing these animals have hit crisis levels, raising fears that they could go extinct within 30 years. Fortunately, conservationists are working tirelessly to help - inspired, no doubt, by the fact that youngsters like Budi are fighting so hard to survive.

Visit IAR's website to learn how you can help. 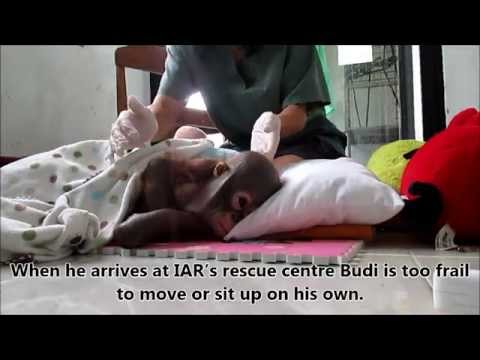