The stallion stood between the mare and her baby. He had just tried to kill the baby while the mare watched in horror, unable to intervene.

But the mother was desperate to get to her newborn. Her baby needed her. Especially now.

The stallion, who was second-in-command of the band of horses, had fought the lead stallion for control on March 2. He won and took over. For whatever reason, the stallion was possessive and saw the baby as an intrusion, or he knew the baby was not his, so he wanted him out of the picture.

So allowing the mare near the foal was out of the question.

And so the band of horses left the baby. Alone in a field.

"He did not try to kill the mare because he wants her close to him," Simone Netherlands, president and founder, Salt River Wild Horse Management Group (SRWHMG), in Scottsdale, Arizona, told The Dodo.

Wild horse herd dynamics are complicated, which is why Netherlands and her organization studies them.

"Sometimes it's hard to explain nature," she said. "This was a real exception, however, and in all 18 years we have never witnessed this kind of aggression toward a newborn before."

SRWHMG has been monitoring the Salt River wild horses, who reside on the lower 18 miles of the Salt River in the Tonto National Forest in Arizona. The organization records scientific observations of the horses and their behavior, migrating patterns and herd dynamics.

The organization is working with the U.S. Forest Service to come to an agreement on working together to manage these horses and was lucky when they were given authorization to help the abandoned baby.

"We always have 10 volunteers around the river," Netherlands said. "When something happens we immediately go to the area."

Some members of the public tried to intervene. "They literally stepped in between the baby and the stallion," Netherlands said.

Because they are wild animals, it is impossible to predict what they will do. SRWHMG waited two more hours to see if the band of horses would return and accept the baby it left behind. It never did.

"Our main goal is to keep these animals wild, but when there is needless suffering going on and we have the ability and authorization to do something about it, then we will," Netherlands said. "If not, the baby would have starved to death."

The baby was taken to a veterinarian for emergency medical attention. Although his injuries were minor, he received an IV, and he needed plasma and colostrum, the first milk made by mares to feed their foals, which is critical for survival.

The rescue team called all over town in the middle of the night to find colostrum, which finally was found for the baby they named Rosco. The next morning he received more plasma and continued to be fed every two hours.

Rosco is now safe at an affiliate rescue where he continues to receive round-the-clock feeding and care.

Bonding with a new mother

Instead of bottle-feeding, the vet said Rosco should learn to drink out of a bucket, and he did well.

But because Rosco had no mother, Netherlands and her team searched for a nurse mare while feeding him the baby formula. The search finally led to a mare who recently lost her baby. They are leasing the mare, named April, from a private owner and hope to negotiate to keep her.

"Now we have to teach little Rosco to drink out of a baby bottle again," Netherlands said. "He does not see the mare at all as a food source. We had to completely retrain him. He did not know what nipples were. It literally took three to four days to suckle from her. And she didn't accept him right away. We had to watch her and had to teach him."

Rosco is so used to humans that he doesn't see April as his mother. So, volunteers are there 24/7 to supervise feeding and help ensure a bond happens between the two.

"I am amazed by the perseverance and dedication of our volunteers," Netherlands said. "I am amazed by how much people will do when a horse has to be rescued."

Rosco loves people and has a fun personality. "He's so adorable and cute that we have to resist ourselves from petting him every day," Netherlands said. "At this point he doesn't think he's a horse. He thinks he's a big dog." 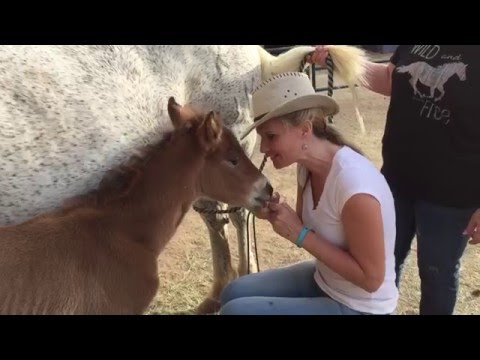 Netherlands intends to keep him near and give him a loving home with a band of other rescued domestic and wild horses as close to what he would have had in the wild.

The future of the Salt River wild horses is still unknown.

"A public notice in the Arizona Capitol Times [on July 31, 2015], stated that they were going to round up and impound the horses or otherwise dispose of them," Netherlands said. The impound notice was rescinded after continued pressure from the public, negotiations between SRWHMG and the Forest Service, and a lawsuit filed by SRWHMG.

But they are still not safe.

"They are our history," Netherlands said of the horses, who were seen in the area as far back as 1790. They are not protected under the The Wild Free-Roaming Horses and Burros Act of 1971, which is why the Forest Service claims they are unauthorized livestock.

Under the act, unauthorized livestock do not have the same status as wild horses. SRWHMG hopes that the Salt River wild horses will finally be given their own territory. The group is working with the Forest Service to allow the horses to remain where they are.

"Our goal is to work together through a memorandum of understanding to manage the horses humanely," Netherlands said.

You can help Rosco and SRWHMG with a donation to the group's PayPal account or Gofundme page. Check the website for more information and go to the Facebook page for updates.