Whenever a baby elephant gets rescued, it's a good thing. When he is accompanied by two other babies in need of a new home too - it's triple the good news.

Earlier this week, rescuers from the David Sheldrick Wildlife Trust (DSWT) in Kenya received a report about a young elephant calf that had been rescued after falling down a well in the remote Milgis Lugga region.

"The Milgis Trust scouts attempted to reunite him with the herd but sadly this did not succeed and yesterday morning we were called to rescue little Wass [the baby elephant], named after the area he was rescued," Amie Alden, a spokesperson for DSWT, told The Dodo.

DSWT rescuers quickly set out to retrieve the calf, and were met with two other unexpected orphans: tiny ostrich chicks.

See the trio's journey below: 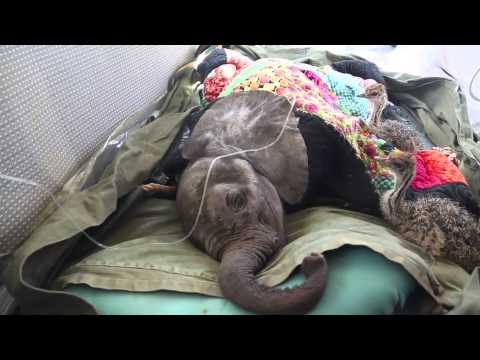 The three rescues arrived at the nursery safely, Alden said.

"All young elephants are extremely fragile, not least when they have experienced being separated from their mother and we are therefore currently providing Wass the specialist care he needs."

Wass will likely see the wild again - after regaining his strength for a few years in the nursery, he will be slowly reintroduced to the wild, along with the other elephants he's living with now.