Arturo, the only captive polar bear in Argentina, died of complications from old age on July 3 at the Mendoza Zoological Park. He was 30 years old.

Known as one of the world's saddest animals, Arturo lived in conditions that animal advocates said made him go "insane." He often exhibited stereotypic behaviors, repetitive movements that arise from the stress of captivity. 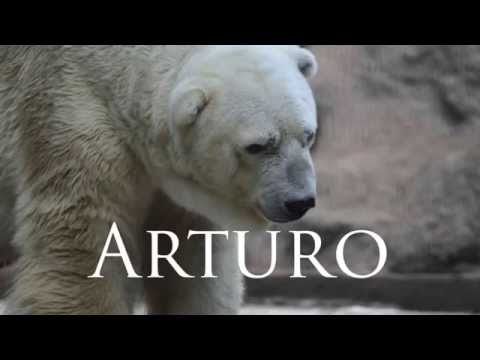 In the last few years, hundreds of thousands of people signed petitions calling for Arturo's rescue from his concrete pit in the arid South American climate, which can reach temperatures as high as 100 degrees in the summer.

"Arturo spent a lifetime in conditions that I think would be inherently stressful and unkind to him as an animal," Barry MacKay, senior program associate at Born Free USA, told The Dodo. MacKay was part of the movement in 2014 that tried to have Arturo relocated to a zoo in Canada, where the climate would be more appropriate for him.

"What we were trying to do with the petition was to give him some environment that he spent so many years evolving to live in," MacKay said. "Every part of a polar bear's body is designed for snow, for ice, for predatory habits and roaming huge distances. For 30 years Arturo was deprived of it."

And this deprivation didn't go unnoticed. "The heat must be unbearable for him, making his lonely life that much worse," one concerned resident of Argentina wrote. "Seeing the pictures of his despair and suffering is so hard to bear. Could you please reevaluate his situation."

But some doubted whether Arturo was healthy enough to make the trip, and the Mendoza Zoo refused to give him up.

Now, it's just too late.

"It is with the heaviest of hearts to inform you that Dear Arturo gave up his fight to live, and passed away today," an advocacy page for Arturo announced on Facebook on Sunday. "Arturo I wish you had known of the so many people worldwide who loved you, who fought for you, who tried so hard to bring your plight more awareness."

For many animals in captivity, things really are changing. The Buenos Aires Zoo recently announced that it would release many of its 2,500 animals to wildlife reserves and convert the 140-year-old institution to a park focusing on education.

But for Arturo, who arrived at the Mendoza Zoo when he was just 8 years old, after being born and spending his early life in captivity in the United States, change just didn't happen fast enough.

"I think it's a tragic situation, and I hope that we can put an end to keeping these animals in environments that aren't good for them," MacKay said.

"You are free now, Arturo," the Facebook page wrote.