Animal Rescue Stories: Do They Make Us Feel Too Good?

Human-animal relations scholar Keridiana Chez recently wrote to me to say she was bothered by the trend that she'd seen on BuzzFeed and other sites of focusing on feel-good "rescue narratives." These are short stories, told in a series of photos or a video, in which a single animal (a dog, usually, but sometimes another type of animal) has been rescued from a horrific situation, rehabilitated, sometimes from the edge of death, thanks to the love and hard work of dedicated animal rescuers, and transformed into a new creature. (For examples of these stories, see here, here, and for the relatively rare farmed animal story, here.)

When I asked her what bothered her about these stories (which I avidly read, and often cry through), she said that she worried that they obfuscate systematic forms of abuse, by simply focusing on individual animals who have suffered abuse.

This first video, the story of Miley, a dog who was barely surviving on a trash heap in Los Angeles, was viewed by almost 18 million people and generated countless donations to the organization that saved her, and she had a pool of over 500 people who were competing to adopt her. Miley, after her years of suffering, had a wonderful end to her story. 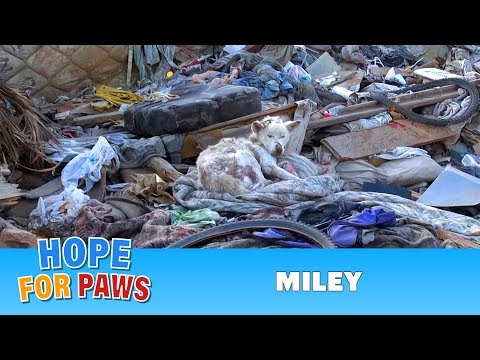 But millions of other dogs live in situations just like hers; they live in dumps, in alleys, under freeway overpasses. They survive on the edge of life, worrying every day if this will be their last. And while we live in perhaps the most dog-loving nation on the planet, with thousands of rescue groups working to save dogs like Miley, the reality is that millions of dogs are still being euthanized every year in our nation's shelters, and an unknown number are simply dying on the streets, unloved and unwanted. This is because we still live in a country in which dogs are easy to breed, easy to buy, easy to sell, and easy to abandon.

And that's just dog rescue stories; remember, we live in a nation that loves dogs.

Occasionally, we will hear a story of a pig or a cow who escaped slaughter, and who was rescued and ended up at a farm animal sanctuary. One of the most famous of all was Cincinnati Freedom, a cow who escaped from an Ohio slaughterhouse, and became a celebrity, receiving the key to the city of Cincinnati, getting her own Wikipedia page, and ultimately spending the rest of her life at Farm Sanctuary in New York.

But for all of Cinci's celebrity, one wonders how many people stopped eating meat as a result of celebrating the story of this cow who desperately wanted to live? Certainly her story did not result in any legislation to end any of the abuses endemic to the factory farm system from which Cinci was victimized.

So we cheer for cows like Cinci, or more recently, an unnamed cow who escaped from a slaughterhouse in Baltimore only to be shot dead by police, and yet do nothing about what those cows were escaping in the first place. In fact, most of us are happy to eat all of the cows who did not escape their fates.

But at the same time, there has to be a way of situating these individual lives and their individual stories within a larger context. If we truly love animals, and we wouldn't eagerly watch these videos if we didn't, then we should be willing to look at the larger structural forces that are allowing these individual animals to suffer, and that are also allowing millions (billions, in the case of farmed animals) of other animals to suffer.

For the activists who are already fighting animal abuse, the victories are necessary; otherwise how would we cope with the devastating knowledge of the catastrophic suffering all around us?

But for those who see the videos and read the stories and don't see that behind every Miley or Cinci are thousands or millions in pain, then these stories need to do more. They need to provoke action and change.