Animal Shelter Gets Robbed, And The Most Beautiful Thing Happens

There's something remarkable unfolding at one animal rescue, where a sad situation turned into a powerful movement.

On Sunday morning, staff at the Animal Rescue League of New Hampshire stumbled onto a shocking realization: Someone had broken into the rescue's food pantry and stolen about 65 bags - or $700 worth - of donated cat and dog food.

"A staff person came in the morning and noticed that someone had pushed through the chicken wire on our community food pantry and they had taken everything," Monica Zulauf, president and CEO of the rescue, told The Dodo.

"They left one small bag of kitten food."

Zulauf explained that the donated pet food goes out to food pantries, elderly individuals who can't afford pet food and families struggling with financial hardships. The thief essentially stole from the neediest of the needy.

With the hopes of identifying the thief, the rescue shared surveillance video of him caught in the act: 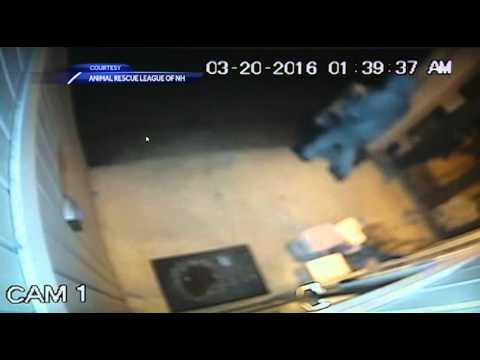 Shortly after the discovery, the rescue contacted the police and shared a press release on social media. From there, Zulauf said, Facebook and Twitter exploded. Before local media outlets had a chance to report the story, the rescue's parking lot was full and cars were lining up to drop off food.

"The community response was amazing," Zulauf said. "It was a steady stream of everything - from toddlers carrying little bags of cat treats to families who had picked up full bags of pet food."

She also mentioned how widespread efforts to help the shelter have been, from one couple whose daughter lives in Maryland calling to urge them to donate, to the husband of a reporter who witnessed a nearly-empty pet food aisle crammed with people.

"The only thing I can compare this to is the end of 'It's A Wonderful Life,' when everybody in the town comes in to save the bank," Zulauf said.

In the meantime, the theft case remains under investigation. There are no identifiable suspects at the time. However, Zulauf said she heard some unconfirmed reports of a man trying to sell pet food in front of local supermarkets.

"I don't know what your thought process is when you decide to steal donated pet food from a food pantry," Zulauf said. "I never really want to understand that thought process." She added that in a meeting on Monday, the rescue decided it will share its influx of food with other shelters and organizations in need.

Furthermore, because of the amount of people coming through the rescue, most of the animals present have managed to find forever homes with families.

"I'm going to guess it's close to 10 times what we had before now," Zulauf said about the overwhelming amount of food that's been brought to the rescue since Sunday.

"It's still coming too."

The Animal Rescue League of New Hampshire is good on the food front, but if you'd like to donate, check out other ways you can help here. Alternatively, you can always donate food, supplies or money to shelters and rescues in your area.