There's something truly magical about seeing a dolphin swimming wild and free - and for good reason. For millennia, humans have looked upon dolphins with a sense of kinship and wonder as animals with whom we seem to share so much, yet who live in a world so unlike our own.

But more magical still is the chance to see a dolphin who is so rare that there are believed to be fewer than two dozen like him on the planet. A sighting like that might have once been the stuff of legend, but thanks to this video footage, it's one we all can share.

As Florida Today points out, albino dolphins have been seen only around 15 times worldwide in the past 50 years - and fewer still are evidenced on film with such clarity.

The footage, shot from shore, offers just a few fleeting glimpses of the all-white animal cresting the surface of the ocean, a tantalizing look that still manages to retain a sense of mystery.

According to Florida wildlife biologists, albinism is considered extremely rare in dolphins; it's thought that only 20 or so bottlenose dolphins with this genetic condition exist.

Watch the entire video below: 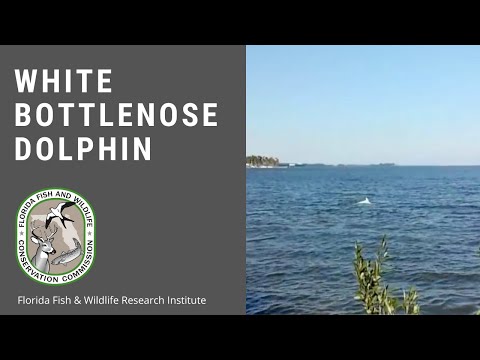