Octopus Attempts To Escape Tank, Is Rebuffed Tentacle By Tentacle

A video making the rounds this week appears to show an octopus trying to escape his tank at the Seattle Aquarium, amid the terrified screams of human onlookers.

His gallant attempt was thwarted when an aquarium staffer reached up to push the octopus back into the tank, tentacle by tentacle.

Octopuses are known to be highly intelligent; adept at solving puzzles and squeezing through tiny spaces. They can also see polarized light, a type of light not visible to the human eye, which helps them change the color of their skin. Just because this octopus was trying to climb out of his tank doesn't necessarily mean he was unhappy there - at least that's what the aquarium says.

"It's a new octopus, Ink, in a new exhibit exploring his boundaries," Seattle Aquarium's Tim Kuniholm told Q13 Fox News. "In the video that's been shared by the public it's one of our staff members helping Ink back into his exhibit after exploring the edge."

Seattle Aquarium's Laura Austin told The Dodo that to keep Ink entertained, he gets occasional enrichment, including a Mr. Potato Head toy to dismantle. She said that Ink, like the aquarium's other octopuses, is only visiting. Once he gets old enough to mate, Ink will be released back into the Puget Sound where he came from.

For the time being though, his home is that tank. In the background of the video one of the staff members can be heard saying, "Do you want me to get the lid now?" 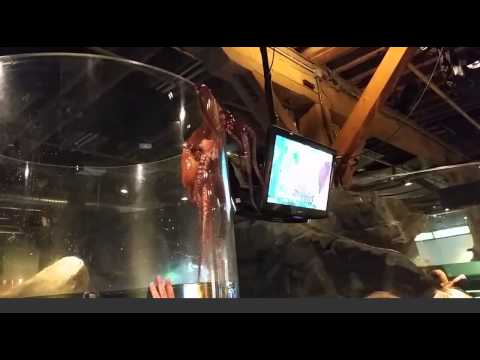