This year marks the 35th anniversary of "Heaven's Gate," the infamous cinematic flop that bankrupted the United Artists studio. While there seems to be a growing urge among critics to rehabilitate the film's reputation, I must reluctantly side with the original consensus. Director Michael Chimino's vision of class struggle on the American West is an absolute snoozefest, despite increasingly topical subject matter. Moreover, animal abuse involved in production has been completely lost in discussion of the movie's legacy. Meanwhile, the film's narrative highlights the historic entanglement of violence against humans and animals.

It's hard to overemphasize what a critical and commercial disaster "Heaven's Gate" was upon its release in 1980. The film was initially provided a $12-million budget, but this grew to a then-astronomic total of $44 million, due to Cimino's endless retakes and insistence on historical authenticity, among other things. In the end, "Heaven's Gate" recouped a mere $3.4 million at the box office, while receiving a critical drubbing. In the New York Times, Vincent Canby likened it to a "forced four-hour walking tour of one's own living room."

As mentioned, in recent years there has been a noticeable trend among critics to reevaluate the film more favorably. For instance, in 2011, Time Out London staff named it the 12th greatest western of all time. The following year, in the New York Times, Dennis Lim argued that "present-day viewers may well find that time has been kind to 'Heaven's Gate,'" describing the film as an "elegiac rethinking of the myths of the West and the western." Writing for the Guardian in 2013, Peter Bradshaw called it a "spectacular western epic," both "colossally ambitious and mysteriously moving." Despite my sincere desire to join this positive reassessment, I can't honestly do so. Admittedly, I haven't seen Cimino's most recent, 216-minute cut, which the 2012 Venice Film director called an "absolute masterpiece." But if it's anything like the 219-minute version available on Amazon, I can say that though the movie is beautifully shot, it remains tremendously boring and overlong.

Further, the allegations of animal cruelty perpetrated during its production should not be forgotten or ignored. According to the American Humane Society's review of "Heaven's Gate," the movie "includes an actual cockfight, several horse trips, and a horse being blown up with a rider on its back. People who worked on the set verified more animal abuse, such as chickens being decapitated and steer being bled in order to use their blood to smear on the actors instead of using stage blood." Ultimately, this led the actors' guild and the producers' association to authorize the American Humane Society to monitor all animal use in film. But as a recent expose in the Hollywood Reporter demonstrated, the oversight is far from adequate. One hopes that if "Heaven's Gate" were made now it would rely solely on CGI animals.

What the film does offer is an illustration of how violence against humans and animals has historically overlapped. As sociologist David Nibert put it, "harms that humans have done to other animals - especially that harm generated by pastoralist and ranching practices that have culminated in contemporary factory-farming practices - have been a precondition for and have engendered large-scale violence against and injury to devalued humans." Primarily Nibert traces European colonization, showing how violence against indigenous populations was often made possible and motivated by animal exploitation. "Heaven's Gate," set in 1890s Wyoming and loosely based on the Johnson County War, follows a similar pattern, though the human victims in this case are European immigrants. In Cimino's film, rich cattle barons, whose wealth is generated through the murder of cows, kill those impoverished settlers who threaten their herds.

But this unintentional representation of a historic phenomenon is not nearly enough to save "Heaven's Gate." Thirty-five years after its release, don't fall for the revisionist hype. Because it's still a bad movie - purely on artistic terms. Worse than that, the production involved willful torture of animals. 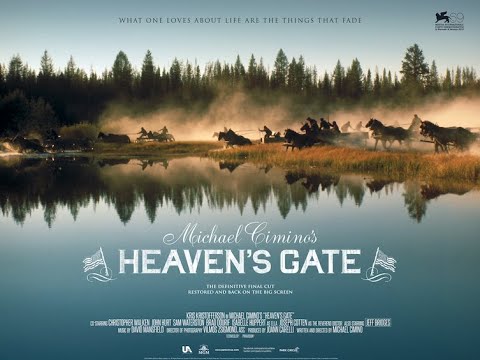