"I'm writing from the horrific scene of an emergency rescue of more than 120 farm animals in New York's Hudson Valley. What I'm seeing will haunt me until the day I die."

These grave words were written by Susie Coston, national shelter director for Farm Sanctuary, who sent out an appeal to help on Saturday after the Hudson Valley SPCAentered an upstate New York farm with a warrant. What they found was the stuff of nightmares.

The Hamptonburgh, New York, property was rented to people who run a bakery serving farm-fresh meat. The animals at the farm were intended to be future meat dishes.

Adjacent to the filthy barns, rescuers found a makeshift slaughterhouse where chainsaws appeared to be used to kill the sick and ailing animals.

"The ammonia levels were so high," Coston told local news, detailing the enclosures and the conditions of goats, cows, sheep and other animals who were emaciated and plagued with pink eye.

"It's like a garbage dump with animals," Coston wrote. "I have to step past body parts of the dead to get to the living."

In a massive effort, the animals were removed from their hellish lives. Those who needed urgent medical treatment were taken to Cornell University's animal hospital, while those in better shape have already begun to arrive at their sanctuary homes.

A mother pig and her babies are settling safely at Woodstock Animal Sanctuary.

Rescuers like Coston stayed up for 24 hours to help these animals.

"Cats fed: check. litter cleaned; check. dogs fed; check. took a shower to wash off the thick stink," Coston wrote on Instagram after the longest day, "check, with the greatest staff in the world helped rescue over 160 animals from one of the most disgusting and sad back yard butchers I have ever seen."

The sanctuaries involved in this rescue are truly giving these animals their lives back. Help support the new residents at Farm Sanctuary here.

Watch news coverage of the rescue below: 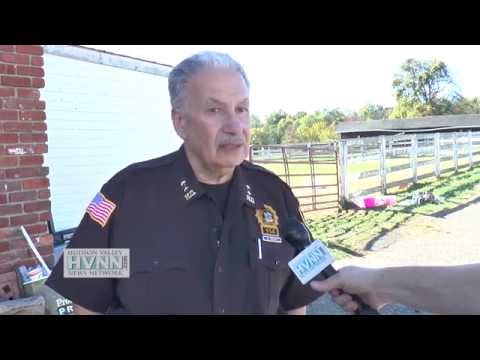 We'll continue to follow this story as it unfolds. Have a tip? Email sarahv@thedodo.com.