A group of 17 bears has been rescued from an abysmal concrete enclosure in Georgia and moved to an Wild Animal Sanctuary in Keenesburg, Colorado, where they now roam on a 60-acre natural landscape. According to Kathy Guillermo, PETA's Senior Vice President of Laboratory Investigations, five of the bears were moved in early January, including two pregnant females so they could be "comfy in their dens" before giving birth. The other 12 made the 22-hour trip last Wednesday. Thanks to an investigation by PETA and others, the Black Forest Bear Park in Helen, Georgia, where the bears used to live has also closed down.

And even better news -- the two pregnant brown bears, who had been repeatedly used for breeding but had never been allowed to keep their cubs, gave birth shortly after arriving at the sanctuary. For the first time ever, each will be able to raise their own cub. 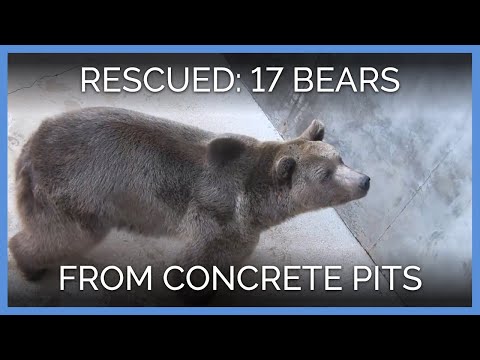